Crossing The Barrier To Determine Your Options

Brain metastases are usually treated with surgery, radiation and chemotherapy – either as a separate modality or in various combinations. Importantly, increasing evidence has shown that the status of genomic alterations has revealed the possibility for the treatment of brain metastases with targeted therapies.

Owing to the blood brain barrier (BBB), only a limited amount of circulating tumor DNA (ctDNA)from the central nervous system (CNS) can be released to plasma, which suggests that plasma-based liquid biopsy might provide incomplete information of brain metastases. Numerous studies have shown that a liquid biopsy using cerebrospinal fluid (CSF) is more sensitive than plasma to detect targetable genomic alterations, characterize resistance mechanisms and monitor treatment response in brain metastases3-7. Specifically, a non-small cell lung cancer (NSCLC) cohort study showed that in patients with brain metastases, actionable genomic alterations could be found in the CSF of all patients. However, 26.9% of the patients exhibited no genomic changes in the plasma (Table 2). Therefore, the use of CSF analysis may be more beneficial for a patient with brain metastases. 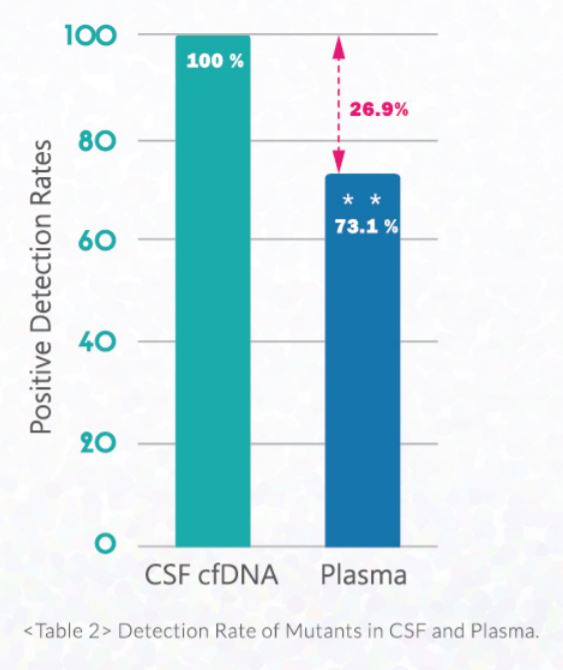 A 56-year-old female, with stage II NSCLC and harboring two EGFR-sensitive mutations, G719S and E709K, had been treated with targeted therapy according to the official guidelines. Simultaneous genomic testing of peripheral blood was performed with no genomic alterations detected until two years later when brain metastases occurred. At that instant, genomic alterations were detected in the CSF but not in the blood samples, which demonstrates the advantages of genetic profiling of the CSF rather than peripheral blood in patients with brain metastases.

1. BBB permits only small amounts of tumor DNA and cells to reach the plasma, which limits the value of plasma ctDNA or circulating tumor cells in evaluating intracranial lesions.

2. Tumor-derived ctDNA in plasma is susceptible to background interference, which is less of an issue for tumor-derived DNA in the CSF owing to the relatively higher amounts of tumor DNA.

3. Liquid biopsy of the CSF could potentially be used to dynamically monitor the burden of brain metastases or novel mutations.

*refer to our specimen instructions